This post begins the long-awaited New Music Feature that I’ve been ranting about for a year now. This past weekend, I was able to experience a composition by a composer named Nat Evans called “Sunrise, September 18.” Nat wrote the piece for a specific site in Seattle, but agreed to let those interested listen to the piece elsewhere. The music was coordinated with the sunrise; those in attendance began listening 9 minutes before sunrise, and the piece concluded about 16 minutes after that. The composer himself was gracious enough to comment on the piece, and I’d like to share his thoughts with you:

"I'm a part of a Zen group, and in Soto Zen, we sit facing a wall. Each week on Sunday evening the light has changed since the previous week, and over the course of 40 minutes the glow of the wall changes as well as the sun sets. Over the years I became interested in how we interact with these cycles as a result of sitting each week. There is also the tradition in Indian Classical music that certain pieces are to be played at specific times of the day and even specific times of the year. Thinking about music in this way combined with my own personal experiences in Zen is where this piece originated, and I decided after mulling it over in my mind for a while that I should just make it happen.

The work was originally conceived as being site specific to Kite Hill here in Seattle - it's right on the water and faces east towards the Cascade Mountains...but the concept of 'place' soon became irrelevant in my thinking process - I wanted this work to be as much about the music as it is about sitting in one place long enough to start  to realize all of the different myriad things that are happening at any given moment both in our surroundings and in our minds. The concept of coming together to take part in something larger than ourselves is a stronger theme, I suppose, but out of that the importance of place comes into play as we make the decision as to where we'll take take part. The concept of place extends through the title as well. The title describes the time of day and when it's happening, and through that natural 'event' it creates a sense of partaking in something, a reason to gather. Ultimately though, one of the experiences that led to this idea was staring at a wall every week, and most places are more interesting to look at than that, so it really could take place anywhere! And...I suppose that's why it is...people will be listing in many different places and contexts that are important and significant to them.” 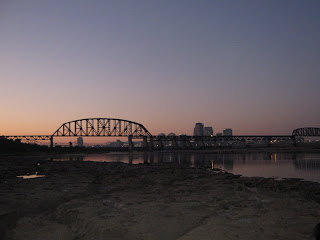 In Louisville, a surprising number of us woke up early to share the experience. We went to the Fossil Beds at the Falls of the Ohio State Park; while being in the largest exposed fossil bed in the world was neat, we were below the visible horizon, so I fear we lost some of the organic nature of the music’s coordination with the sunrise. That being said, it was still a very pleasant experience. Sitting by the river, watching the sky get progressively lighter, and enjoying the music made for an invigorating way to start the day.

I’d like to talk about the “music itself” briefly, with two caveats. First, the piece is designed to be part of something larger; like the music in an opera, one can only discuss the notes in relation to that total experience. Second, I only heard the composition one time. The piece begins and ends with nature sounds. While I think that these sounds might have been manipulated electronically, they are still rather “pure,” and it is easy to distinguish them as what they are. At times, they made a compelling counterpoint to the “real-time” nature sounds going on around us, blending aural experiences and shading the line between music and sound. I believe the piece was in 4 large sections, consisting more or less of fairly static textures of sustained notes, with some micro tonality and some electronic manipulation of the sounds. For me, the piece functioned in the space between full attention and subliminal hearing. The sustained textures created at times a wash of sound that was ever present, but that did not distract me from the larger experience. As such, I feel the music perfectly suited its dramatic function: it accompanied without overpowering, and it enhanced without trying to outdo. It was a sensitive handling of a tricky dramatic subject. It seemed perfectly appropriate to have that music accompany that sunrise, and my strongest impression two days later is of the totality of the moment: music, sunrise, and nature. 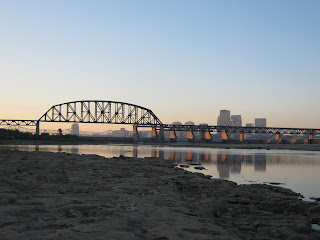 The composer stipulated that each individual must be listening to the piece in headphones. I am sure that there are a number of reasons, both logistical (noise ordinances, getting electricity for speakers) and musical (more accurate hearing of the electronic manipulation of the musical space) for this requirement, but it was the only aspect of the piece that I thought was odd. It managed to create a personal and insular experience in the midst of a large-group. That could very well have been the point, but I wonder what the experience would have been like if we had all be hearing from communal speakers. I hesitate to say that it would have been improved; I simply wonder if the "moment" created by the piece would have extended through the entire group, or if the experience was best internalized in a semi-personal way.


Overall, it was a unique experience that I was very glad to have shared! For those interested, here’s a link to Nat’s website: natevansmusic.com